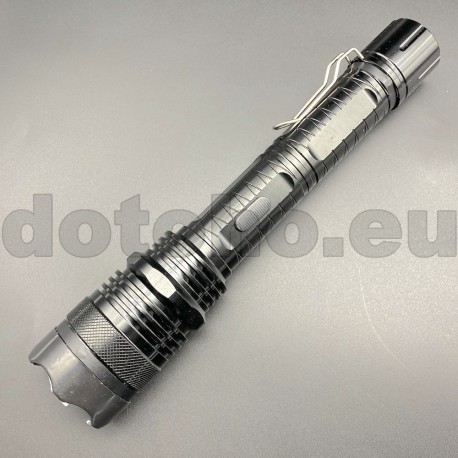 A real powerhouse, this stun gun with its 10 million volts. Made for security services that require high power at thick clothing or for people who also like to have an effective self-protection device in case it next to a flashlight with good light output. This stun gun with flashlight function sets each attacker effectively and in a flash out of action, leaving no permanent injury to him. The lightning discharges cause an electric shock in the neuromuscular system of the attacker.

Once the On / Off switch is eingeschltet at the bottom of the device can be switched using the slider either the flashlight or electric shock function can be activated. Only then can ausgerlöst with the spring loaded push button of the stun gun. Jump over high-voltage lightning discharges between the two contact rails on the front edge of the lamp socket. The optically and acoustically clearly perceptible discharges already have a strong deterrent effect and enable a potential attacker with physical contact strong surges.
The flashlight in this unit has a surprisingly high luminosity of about 180 Lumens (at maximum battery charge) and can thus be used not only for the illumination of the surroundings on next. However, the main function is clearly the electric shock function. Too frequent or prolonged use of the flashlight is going strong at the expense of battery life and may affect the function of the shocker. The power supply is ensured by an internal battery and does not need batteries. Hiebei is however important to ensure that the battery will discharge itself over time. To extend the life and reduce the memory effect, it is advisable to check about every 2-3 months the equipment and may only be discharged with the flashlight and then fully recharge the unit.

Note: The specified voltage in volts takes priority better penetration in eg thick garments. The effect on the body is not significantly different from devices with lower voltage.

Effect of short electric shocks:
Brief electric shocks from a quarter of a second duration can already deter an attacker and cause minor muscle contractions.

Effective medium electric shocks:
An average service life of one to four seconds can bring an attacker to fall and cause disorientation.

Effect of long electric shocks:
A full use of five seconds duration can cause the attacker to any controlled movements is more capable. Orientation and balance disorders can cause the opponent to fall and still affect him a few minutes later.

Note: Each electric shock of about one second duration may bring an opponent to fall and thus lead to fall injuries. Put our instruments in an emergency or for self-defense!