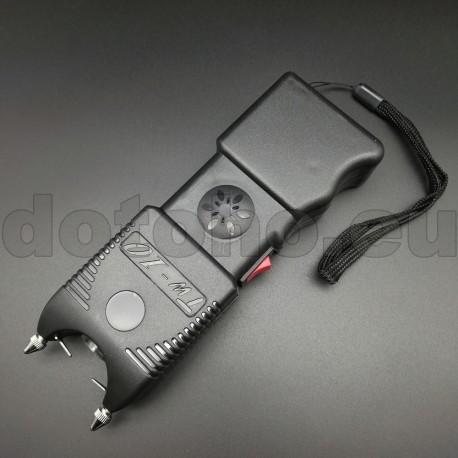 This is TW-10 type high-powered anti-riot self-defense stun gun, easy to carry, just touch the probes to any exposed part of the body of an attacker, you pull the trigger, and watch him make right out of your body-space -. Electric rod is suitable for joggers, security guards, and people who have to go late at night to go home. Stun guns also built-in battery and flashlight for your convenience. Your ideal choice!

This self-defensive Stun gun has several special functions such as high voltage electric shock and strong illumination. It is an ideal self defense device for law enforcement, security guards and civilians due to their extended reach and power.
Self-defensive Stun gun is made of ABS engineering plastic and alloy metal with a high voltage generator and a built-in nickel - cadmium battery. It has an advanced electric pulse technology.

1.Push upward the right switch second gear to shock
2.Push upward the right switch first gear to illuminate
3.The quantity of electric may be not adequate enough after accomplished, so please check first before you.
4.This product is equipped with a built-in rechargeable battery and a built-in charger. Close recharge the tie line with the electric current.
5. The charge time should be 3 - 5 hours, please pay attention to end the charging time. During the Aufladung- above can be can`t be used.
6.Memory function and local action are specialized in rechargeable battery. After a long period of non-use, it should be checked and loaded again before you.
7.The stun gun should not be stored in a humid environment and in super high / low temperature. It shouldn`t be sunned or rained.
8.In order to extend the life span of usage, avoid continually ask using electric shock function for 5 seconds or more.
9.DO NOT shock metal objects
10.DO NOT shock children, children, persons with heart disease and any vital part on human body.

By pressing the sprung trigger reset the device in operation. Jump over high voltage lightning discharges between the two contacts on the front edge of the case. The visually and audibly perceptible discharges have a deterrent effect and give the aggressor in touch strong surges.
This device also has an LED light on the front of the device used at close range.
In addition, this unit features a 120 db siren strong which also can be very effective help to deter. This is how the LED lamp also switched on and off separately from.

The power supply is ensured by a built-in battery and requires no batteries. Hiebei is, however, important to ensure that the battery will discharge itself over time. To extend the life and reduce the memory effect it would make sense to load the device once a month ..

Effect of short electric shocks:
Brief electric shocks from a quarter of a second duration may already deter an attacker and cause minor muscle contractions.

Medium effect electric shock:
In an average period of one to four seconds can bring an attacker to case and lead to disorientation.

Effect of long electric shocks:
A full use of five seconds duration can cause the attacker to no longer capable of being controlled movements. Orientation and balance disorders can cause the opponent to fall and still affect him a few minutes later.

Note: Every electric shock by over a second time can bring an opponent to fall and thus lead to injuries from falls. Put our instruments in an emergency or for self-defense!
The specified voltage in volts brings primarily a better penetration in example bulky garments. The effect on the body is not significantly different from devices with lower voltage.

as for me is perfect